I was so lucky to stumble upon a tweet which was about The Innovation Project and of course, since I am always interested in joining international projects and giving my students the chance of meeting new friends and sharing their work with them, I asked to join it.

The job had to be done in four weeks, not the best weeks in our school year since we started at the beginning of May, but I really found amazing the fact that despite the little time we unluckily could devote to the project, the students managed to do everything by the deadlines and quite well, or so I think.

The first week was about brainstorming the idea of innovation. Working in groups the students had to come up with a definition and an analysis of positive aspects and drawbacks. They had to prepare a video about it.

The second week was about connecting the idea of innovation to the SDGs, so they decided to focus on SDG #7 Affordable and Clean Energy and they thought of creating a Power Bike which can produce energy through some small solar panels and then such energy can be used for example to recharge mobile phones batteries. Maybe not too original but considering the short time they had, I thought it was brilliant!

The third week was about different activities: deeper analysis of SDGs and creation of a tutorial which illustrates a tool the students find useful in their every day job. They prepared some presentations about the SDGs they focused on and a tutorial about the app SimpleMind+, which they use to create mindmaps.

The fourth week was the real fun: we could arrange for some Skype sessions with some of the other schools involved in the project. We had a chance of meeting the students from the International School of Beijing, who talked to us about the radio they have at school and shared their idea of innovation; then we met also the students from the Lebanon Trail High School from Texas, who had done an amazing job about their idea of innovative products.

The project  was a great experience for me and gave me also the possibility to think about my job and find new ways to do it. The enthusiasm which I saw in my students and in all the students that we met during the Skype sessions really makes it clear that if you work on something so globally important and you can compare your job with that of hundreds of others, it is really worth it. The chance I had of bringing the world into my classroom is something priceless.

The challenge this week is about Thinglink Unplugged: capture learning on the go and it is extremely stimulating. You can use the Thinglink app even without Internet connection so you can take pictures in any moment, upload them as a base for a Thinglink and then work on them. I love scavenger hunts and my students are always excited when we do them in the classroom. I usually create QR codes for them to scan and then do a series of activities. This time I thought of using Thinglink to create one for an activity which will be done next school year during a field trip to Venice.I must thank Gert Lemmens, my teacher at the FCL in Brussels, for the idea because I just adapted an activity he made us do during the course.

When we go and visit Venice, we usually give the students some free time in St. Mark’s Square for lunch, for shopping or for what they prefer to do . Next time they will also have some tasks to accomplish, which I do hope they will find fun and interesting. Here they are 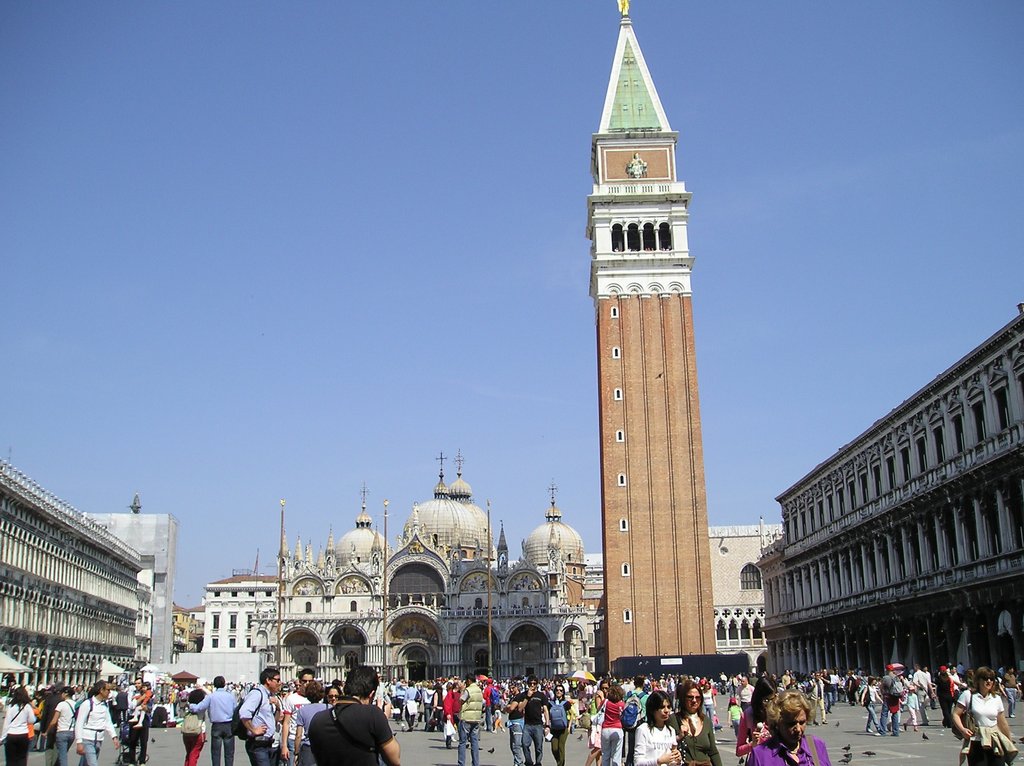 Thinglink is a really flexible tool which allows you to add not only pictures and texts but also google forms and documents. It can be used for projects, research work, analysis of poems or of pictures,  but also for fun,

Yes, I did it again! I went to the FCL again for another course about  Interactive Technologies for the Future Classroom. My first experience is described here.

This time I learnt a lot and above all I had fun! Yes, real fun! Thanks above all to our teacher, Gert Lemmens so inspiring, motivating and challenging, and also to the other participants.

We used i3leanrhub   Prowise  to create nice and engaging activities  for the IWB and we created animated videos with Stop Motion; here my first try with the app done with two colleagues, one from Greece and one from Portugal,

And we did scavenger hunts using QR codes, which I really love!

The tasks our teacher  created for us were quite different, from singing Help while making a video of ourselves as evidence, to dancing, to creating a piece of news for a TV programme, just like this.  Yes of course you can laugh  🙂

To creating a video question ok, you can laugh here too!

My point is. I have learnt how to use new apps and web tools, I have learnt how to create challenging activities, I have worked in groups and I have solved quite a number of problems and, while doing all this, I had a lot of fun. I hope this is what I will remember when I go back to school: how much you can learn, how much you can develop your skills while having fun because school is serious even if it is not all grey and dull

The challenge of the second week was not that exciting, really, just using the functions of the tools: remix images, create channels, share stuff, but the task of the third week was really interesting!
We had to create a collaborative project for our students.

First of all I must confess I had never thought of Thinglink as a possible way to create and work on a project.
I have used it so many times with my classes but usually either as a presentation tool or as a way for students to do a simple research work, but now I have learnt much more.
Ok, my project is not that brilliant as the one Susan Oxnevad, our tutor, created as an example. Check it out, It is fabulous, isnt’ it?

Anyway I thought a lot about it and in the end I realized that the only thing to do was to choose something that can be easily done in the classroom and could be stimulating for a group of 15-year-olds.

I thought of a question which could help them be active and creative and I came up with this “What would you do to make your town more attractive for tourists?” and I went on from there.

Here is my first try with a project made with Thinglink 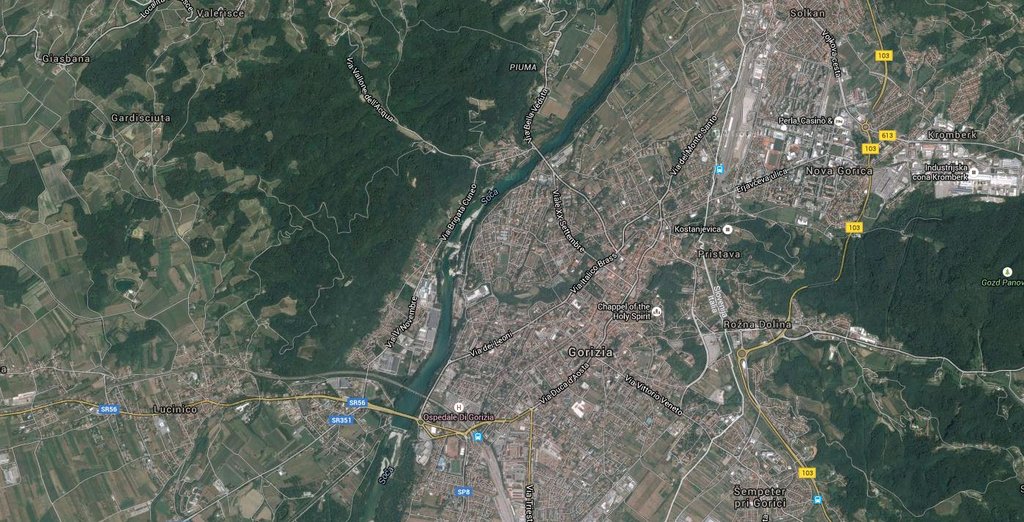 This summer I have decided to take part in the Thinglink Challenge.

I heard about it last year, but too late. This time I didn’t miss it and so, a couple of weeks ago, I started it. I really wanted to take part in it for a number of reasons. First, I like connecting with colleagues from all over the world and sharing what I do or what I think with them. Second, I like challenges. I find them extremely stimulating and the idea of a task to accomplish in a certain time, even though the Thinglink challenges have no deadline, is what makes me work at my best because it makes me stay concentrated and focused on what I am doing. Third reason, I can explore a tool I already know and use but much deeper and so I can find out more ways to use it. Actually I have already learnt something new, even though it is not that clear so far if what is new in only there for the premium version of the tool that you can use during the challenges. Fourth reason, what I create now can be used in the classroom next year, so it is not a waste of time at all, on the contrary it is highly productive

The first challenge was about getting to know each other, as a matter of fact there are so many of us in the challenge that it won’t be easy to get to know everybody!The task was to create an avatar, use the image to create a Thinglink and then add as many tags as possible in order to give information about yourself.

Here is my product : 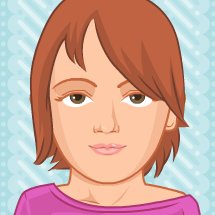 I must say this is a very simple idea but I had never thought of it! What a nice way to make students know each other during the first days at school, for example, or at the beginning of a project with students from other schools. I am sure they avatars will be much more tagged than mine. In addition I have found out a lot of sites which allow you to create avatars. Here is a list:

Avatars are extremely helpful  also when you don’t want to or can’t use pictures of  students for reasons of privacy.

I sometimes need to use avatars when I create tutorials for my students. The one I prefer is the lady from the Tellagami app because she looks quite professional and even though you can’t customize her entirely for free any longer, you can still work on her quite well.
But a couple of days ago I remembered BuddyPoke, an app which I had never used and so almost forgotten.

BuddyPoke allows you to create really cute avatars and customize them, you can then use them with pictures or in videos. You can even make videos with two avatars.

I used it to create the guide to the visit of the epic citadel which I illustrated in my previous post and after that I kept on exploring it and found out that I can use it to make activities far more engaging than they actually are.
Here are some examples

or they can create a presentation about any topic

It is incredible how many things you can learn day by day through social networks. Twitter and Facebook above all are kind of mines of information and are essential for a teacher’s professional development.

And it is incredible how many lessons, videos, tutorials you can create while comfortably sitting on your sofa and using a tablet.

Just yesterday I learnt about Epic Citadel. According to Wikipedia it is “ a tech demo developed by Epic Games for iOS to show off the Unreal Engine 3 running on iOS devices”, which was also released for Android.

I have no idea what Unreal Engine 3 is but I read on Twitter that Epic Citadel can be used also in education. I had no idea either of how to do it but felt curious and so I downloaded the free app and started the tour of the citadel. It is really amazing! It is just a setting with no story, nor people in it but how wonderful to use it for asking students to fill it with stories!

Sometimes students complain about not having ideas when they are asked to write and always need some prompts. So I thought of creating the prompts using Epic Citadel. I needed also kind of guide for them and I remembered Buddy Poke, an app which I had installed some time ago but never used so far with which you can create avatars. The avatar would become the guide I needed!

collage made with Halftone2

I made this short video for my students in few minutes and I am going to use to ask them to write a story and create characters, setting, atmosphere and so on.

The video is thought for my younger students but I think that, with some changes, it could be adapted also for the older ones.

Exploiting Web 2.0
Create a free website or blog at WordPress.com.