I’ve done it! I have created my first scavenger hunt using QR codes. Honestly it was just a try, I mean I didn’t focus so much on objectives or content because I just wanted to see the potentialities of such an activity. I can say I’m satisfied with the way it went.
The activities was anyway focused on vocabulary and it was meant for 15 year-old students with an A2 level of English.

What was it about? I wanted to make the kids practise prepositions and some vocabulary we had studied during the school year. Consequently I hid the codes in different places inside the classroom, i.e. under the dustbin, on the cupboard, inside the cupboard, under the teacher’s chair, on a window pane, and so on.
Each code included a riddle and the clue to find out the next one. Each riddle was about a letter of the alphabet: i.e. it’s the serpent you find in the place where young people meet, have fun, socialize and ….learn. They had first to think of what place it is ( = school ) and then of the letter which is a serpent (letter S) and so on. We created four groups, each group had to find out two letters. In the end, they had to put all the letters together and find out the mysterious word, which was suncream 🙂 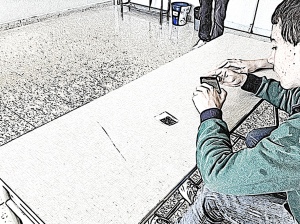 Other riddles were: in the sport that looks so violent (rugby) it comes in the silver place (letter u);
you can find two of this in what is delicious in summer and … why not? in winter too (icecream); but be careful, it is not what you can find in cars (E and not C) and so on.

What I noticed was the attention they paid while reading the clues; the way they exchanged opinions trying to find out the solutions (no, it can’t be that because …), the correct way they all respected the rules and finally their concentration when they had to find out the mysterious word 🙂 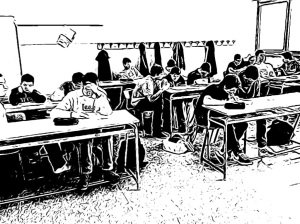 I think this is an activity that can be used in plenty of different ways. I created the codes using the site http://www.classtools.net/QR/ because you don’t need Internet connection while using them and I only used written texts. With Internet connection, you can however also use audio files or videos and so the activity can be stimulating for different types of intelligence or for students with problems. It could be a different way to practise listening skills, for example, and this will probably be my next hunt.